The conventions are virtual. The rallies are cancelled. And the presidential debates are uncertain. Will 2020 change American electoral politics for good? To answer that question, we look to history with a new podcast on the past and future of presidential debate.

- That's Debatable:Debating the debates?
- Intelligraphic: The Impact of Presidential Debates
- Double Digits: 1960
- Points of View: Insights and analysis from past debaters

THAT'S DEBATABLE
Two perspectives on one of the nation's biggest debates this week.
The Great Presidential Debates... Debate

Sixty years ago, the first televised presidential debate hit the airwaves, changing campaign strategies for decades to come. And as the conventions and campaigns go virtual this year, we may be looking at yet another sea-change in electoral politics. To learn more, John Donvan sat down with a founder of America’s presidential debates, former chairman of the Federal Communications Commission and Presidential Medal of Freedom recipient Newt Minow. Here’s what he had to say:

- In 1955, Newt first pitched the idea for presidential debates in a memo to his then-boss, Governor Adlai Stevenson.


- Debates without an audience are abnormal, but not unprecedented. In 1960, during the third debate, the candidates were too busy traveling to gather in person and participated remotely.
- In 2008, McCain didn’t want to debate. The Commission refused to cancel the event and forced the senator’s participation.
- Makeup has been a contentious topic with some male candidates refusing it outright because they thought it challenged their masculinity.
- The Commission on Presidential Debates works with some 90 other countries to facilitate debates between their candidates.

Turning to the 2020 elections, we’re diving into the debate behind the debates. Do they serve as the “ultimate job interview,” offering voters valuable insight into the candidates? Or should we rethink them entirely?
For: Let's Scrap the Presidential Election

“The debates have never made sense as a test for presidential leadership. In fact, one could argue that they reward precisely the opposite of what we want in a president.”
- The New York Times

Against: Presidential debates demonstrate who has what it takes

“And these debates, for all their failures as discussions of policy, offer a chance to see how each candidate fares under pressure.”
- The Hill 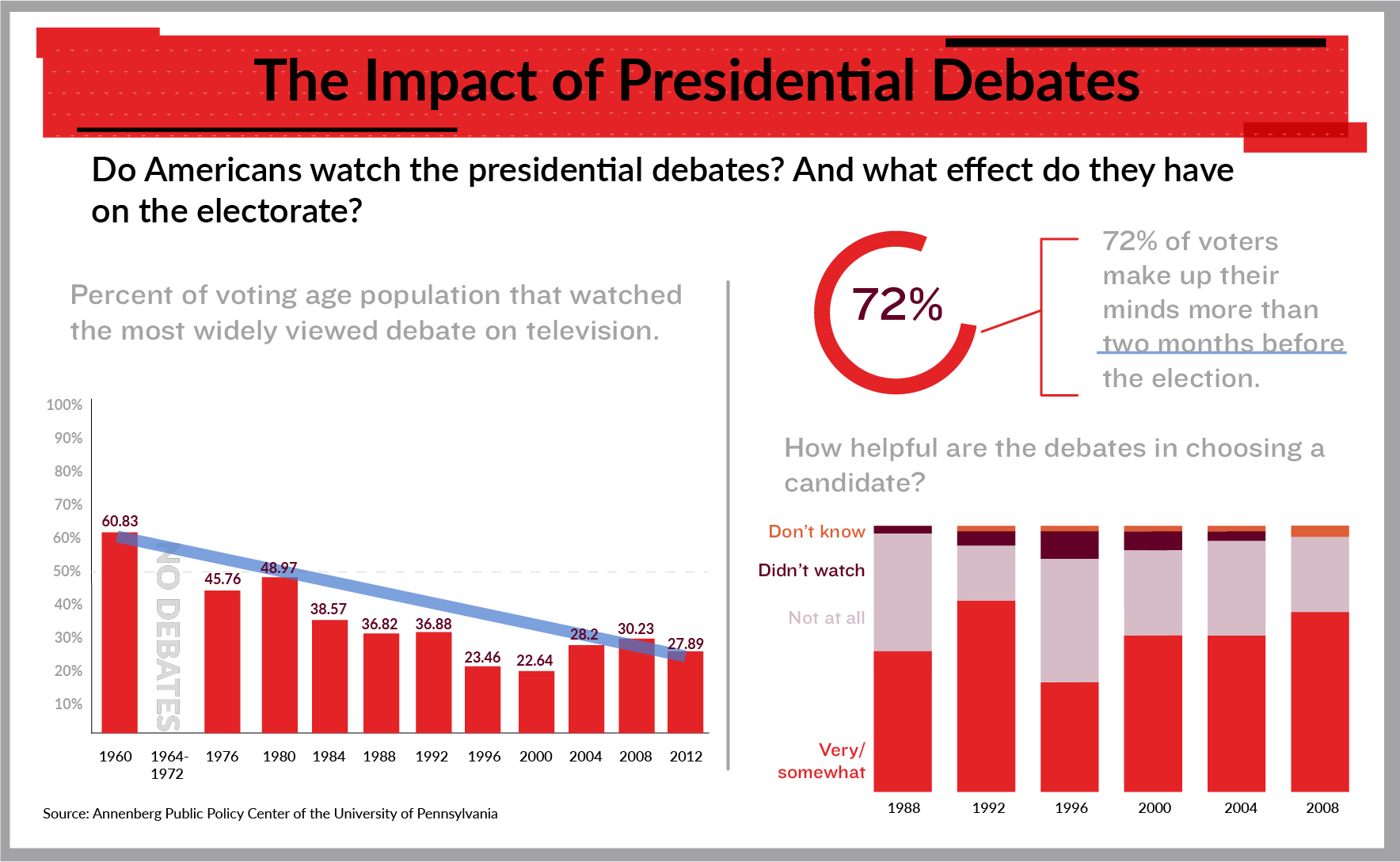 1960
The year of the first televised presidential debate

On September 26, 1960, Richard Nixon and John F. Kennedy made history as the first presidential nominees to debate on television. And many have heard the tale: those who heard the debate on radio believed that Nixon had won the debate, those who watched the televised version were compelled by Kennedy. But even then, commentators disagreed on the merits of this novel event. Look back and decide for yourself if television has fundamentally changed American politics.

- Could TikTok start Cold War II? Niall Ferguson argues that China is tapping into the U.S. playbook by exporting its values with the video-sharing app. (Read more via Bloomberg, Nialls's debate on the financial crash of 2008.)

- Aaron David Miller writes that the UAE-Israel peace deal is part of a continuing trend in Israel and Arab state relations. (Read more via CNN, Aaron's debate on the middle east.)