Do we want our elections resolved by the courts? It hasn’t happened since the days of hanging chads, puzzled reporters, and confused Floridians. Only this time, the U.S. presidential election doesn’t hinge on a single state. That, however, hasn’t stopped a multi-state lawsuit blitz from going forward on President Trump’s behalf, setting up what could be protracted litigation as inauguration day nears. Cracks in the bedrock are showing.
Well, maybe.
Some argue that this is just what the system was set up for. Send it to the courts. Better to hash it out there than on the streets.
But others say these lawsuits are just one avenue of the president’s “flood-the-zone” strategy, designed to peddle misinformation and undermine an electorate that – though close – appears to have picked his rival, Joe Biden, as America’s next Commander-in-Chief.
In this especially timely debate, Intelligence Squared host and moderator John Donvan engages with two competing legal minds -- one of a former prosecutor and law professor, the other of a former White House attorney -- to answer an essential question in the nation’s unfolding history: “Are Elections Lawsuits Good For Democracy?”
As always, let us know what you think.
P.S. -  Sign up here to find us in your inbox each week.  And if you like what you read, consider sharing this blog post with a friend here. You can always reach us at info@iq2us.org with ideas and feedback.
We’d also like your opinions on an upcoming debate: In the wake of unprecedented stimulus spending, should we all “Stop Worrying About National Deficits?” Submit your arguments and we’ll include them in our live television show, produced in tandem with Bloomberg, and sponsored by IBM.

POINT / COUNTERPOINT
Two perspectives on one of the nation's biggest debates this week.
Are Lawsuits an important tool of transparency? Or do they undermine the public's trust in the electoral process

FOR:
Trump's lawsuits are good for American democracy
“Of course, it remains to be seen whether President Trump and his supporters will respect the results. We should pause nonetheless to note that it’s a good sign that they chose to use this all-American method of contesting the election rather than another, less democratic way.”
- The Hill
AGAINST:
The Republican Party Is Attacking Democracy
“Its weapons are baseless insinuation and evidence-free charges, deployed solely to sow chaos and undermine the results of a free and fair election — one that produced a clear winner and an even clearer loser.”
- The New York Times

INTELLIGRAPHIC
President Trump and his legal team have unleashed a flurry of election lawsuits across the country. Here's a snapshot. 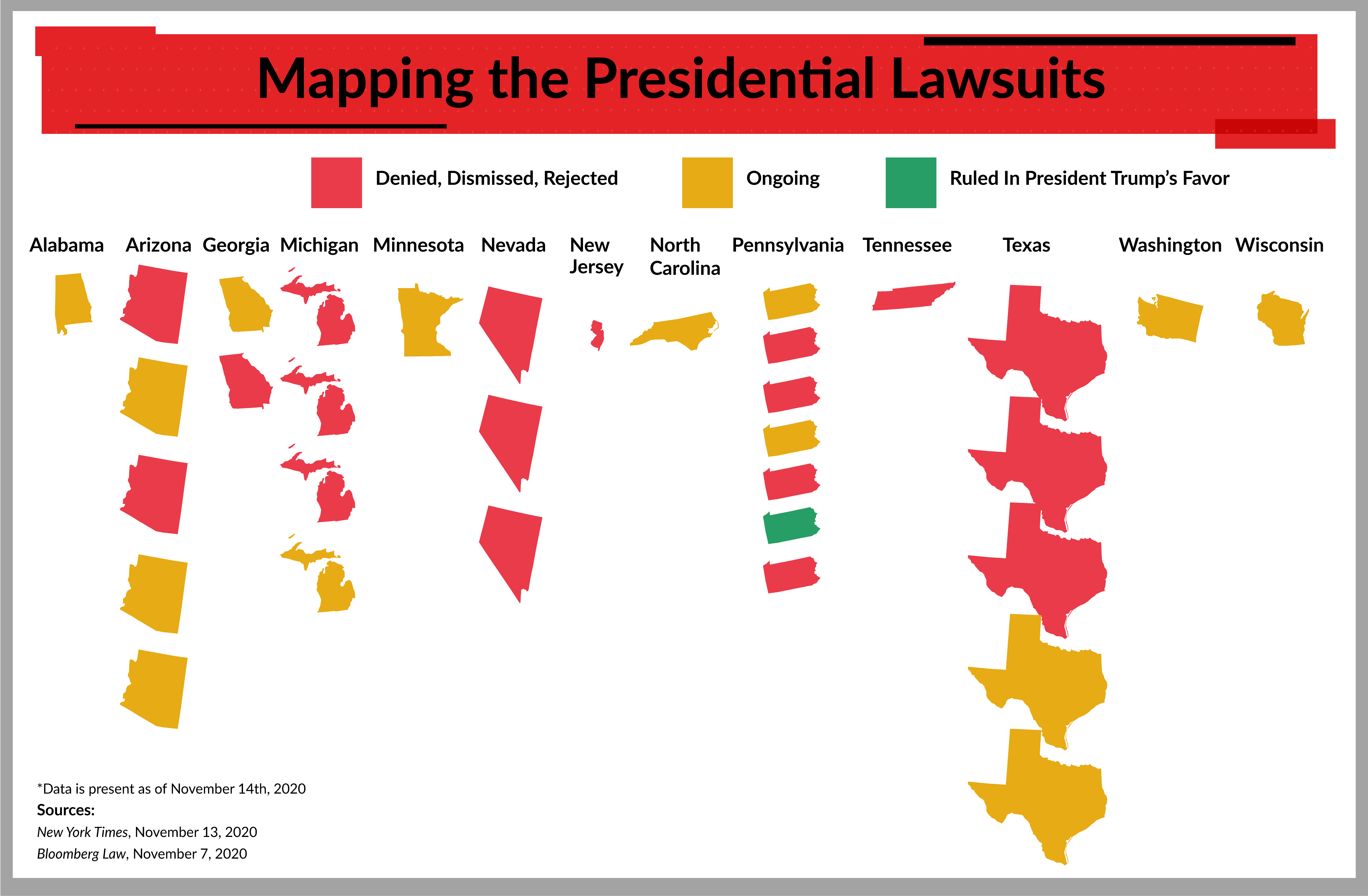 This week, the U.S. broke records, again. As America braces for a surge in coronavirus cases in coming months, Pfizer is in the final phases of FDA approval for a COVID-19 vaccine. But once available, how should it be employed?
FOR:
For a Vaccine to Save Lives, Society Has to Make Some Decisions
“Without careful planning, early vaccine doses will go wherever it is politically and logistically expedient, rather than where they can save the most lives.”
- The Atlantic
AGAINST:
We Don’t Need Government Mandates for Covid Vaccination
“This isn’t smallpox and doesn’t require draconian measures that infringe on basic civil liberties.”
- The Wall Street Journal

- President Trump’s refusal to accept the outcome of the election will not only hurt his image, but undermine the public’s faith in U.S. institutions, argues Lee Drutman. [Read more via NBC News, Lee's debate on the two-party system.]

- Meanwhile, Rich Lowry writes that President Trump’s potential loss is nothing compared to the GOP defeat of 2008, and his legacy is firmly imprinted on the Republican party. [Read more via Politico, Rich's debate on President Trump.]

- Regardless of the outcome of the 2020 election, the U.S. is on a route toward ungovernable, unstable majorities, writes Nick Gillespie. [Read more via Reason, Nick's debate on Medicare for All.]

- Bjørn Lomborg argues that the European Union should lead the charge in combatting climate change, but not with the policies that are in place. [Read more via Euractiv, Bjørn's debate on carbon emissions.]