Coffee. After a week of checking the polls, late nights, and ceaseless speculation, a cup of steamy salvation is likely what much of America needed. Whether you cast your ballot red or blue, voters can find some solidarity in the shared notion that it’s been a long week.
So, here’s our suggestion: Have your coffee… but get another pot ready.
Though The Associated Press offered up a dash of closure on Saturday, November7th, calling Pennsylvania for its native son, and pushing Joe Biden past the 270 electoral-vote threshold he needed to win, the official vote certification process could take weeks. And that’s before all the talk of lawsuits and recounts really gets going.
So what’s to make of all this?
The word “unprecedented” has been thrown around a lot in this election, from the nature of our divisions to the scale of the tech that guides voter opinion. But was it really unlike what’s come before? In this week’s special post-election podcast, our host and moderator John Donvan explores two competing views on that very topic: One from the past, and the other from the future… or at least somewhere thereabouts.
As always, let us know what you think.
P.S. -  Sign up here to find us in your inbox each week.  And if you like what you read, consider sharing this blog post with a friend here. You can always reach us at info@iq2us.org with ideas and feedback.
AND COMING UP….
A growing crop of economists are taking a bold stance in saying that big spending is no bogeyman, and to “Stop Worrying About National Deficits.”
We’d, of course, like to hear from you on this. Submit your own brief argument here and IBM’s Watson will work its AI magic to make it a part of a television show we produce with Bloomberg, called “That’s Debatable.”

POINT / COUNTERPOINT
Two perspectives on one of the nation's biggest debates this week.
Should Voting Standards be Federalized?

Should states continue to write and enforce their own voting rules, or should there be a federal standard?
FOR:
America Votes by 50 Sets of Rules. We Need a Federal Elections Agency.
“In the all too common worst-case scenarios, partisan officials take advantage of the lack of federal election standards to disproportionately purge minority voters from the registration rolls entirely, or invalidate their ballots because of minor technicalities at higher rates.”
- The New York Times
AGAINST:
50 States of Anxiety: Will Federalism Save Democracy in America?
“In an era when many of our institutions have failed to restrain President Trump, the states stand in a class by themselves. State autonomy—in fact as much as in theory—has been one of the biggest bulwarks against Trump’s brand of creeping authoritarianism, perhaps second only to public opinion itself.”
- Verdict

INTELLIGRAPHIC
Has America ever seen these voting numbers before? It depends on where you live. 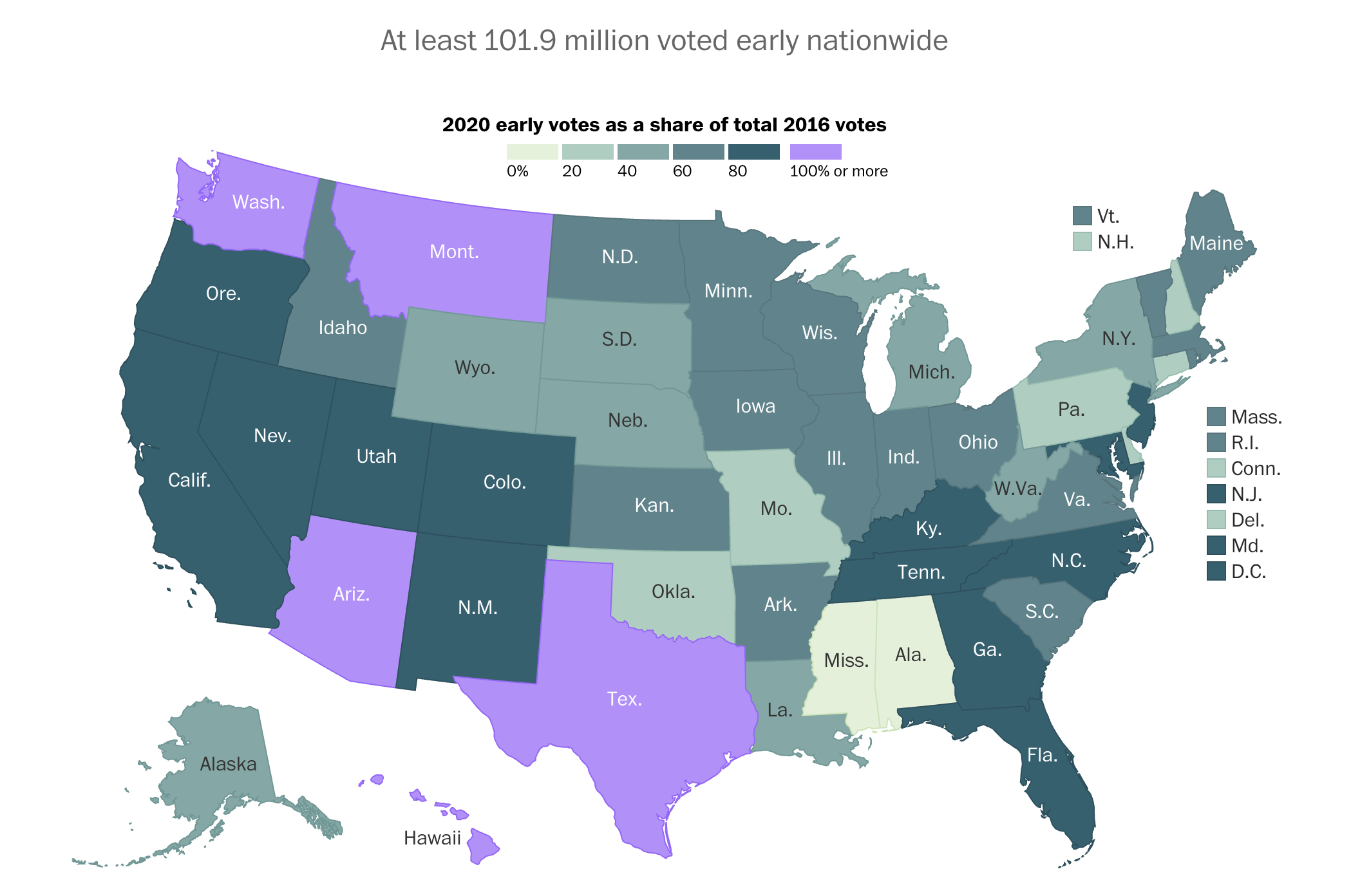 1
The number of states to decriminalize all drugs.

Oregon made history this week, becoming the first state to fully decriminalize the possession and use of hard drugs. Should other states follow suit?

Oregon’s Decriminalization Vote Might Be Biggest Step Yet to Ending War on Drugs
“The fact that so few other nations have followed Portugal’s successful lead in passing all-drug decriminalization speaks to the entrenchment of the war on drugs, and the historic support for and normalization of policies that criminalize poor people of color. Yet in Oregon and beyond this election, U.S. voters have made clear that, in great numbers, people reject carceral responses to drug use.”
- The Intercept

Oregon legalizes self-destruction
“Telling people that whether they want to use heroin is a choice they should make for themselves is not freedom. Nor is it charity. It is the brutal fulfillment of the promise of neoliberalism that state power will never be exercised except on behalf of maximizing individual utility.”
- The Week

- A constitutional crisis may be right around the corner, and it likely won’t be under President Trump, writes Eric Posner. [Read more via Project Syndicate, Eric's debate on constitutional power.]

- As winter approaches, and coronavirus cases are expected to increase, Scott Gottleib argues it is time for a mask mandate. [Read more via The Wall Street Journal, Scott's debate on Obamacare.]

- With or without the U.S., Constanze Stelzenmüller writes Germany needs to step up Europe’s defense. [Read more via Brookings Institution, Constanze's debate on the transatlantic relationship.]

- Roger McNamee advocates for a Biden presidency to regulate capitalism once and for all. [Read more via Washington Post, Roger's debate on social media.]