IQ2US Staff
Sunday, August 30, 2020
A historic weekend in Washington. Months of protest. And an unprecedented boycott in professional sports. This week, we explore two huge debates at the heart of it all: How should Americans teach and remember our history? And should the nation pay reparations for slavery?

Here’s what we have in store:
- That's Debatable:Is it Time for Reparations?
- Intelligraphic: Support for Reparations
- Double Digits: 1619
- Points of View: Insights and analysis from past debaters

THAT'S DEBATABLE
Two perspectives on one of the nation's biggest debates this week.
Is it Time for Reparations?

As the nation faces a reckoning around race, the debate on reparations has moved into the political mainstream. Lawmakers in Capitol Hill and states like New York and California have introduced new legislation aimed at studying how reparations might work in the U.S. And they're not alone. Both Joe Biden and Kamala Harris have voiced their support for a national commission on the topic. Should America pay reparations for slavery?
For: The Case for Reparation
“Until we reckon with our compounding moral debts, America will never be whole.”
- The Atlantic

Against: Embracing Reparation Debases Blacks, Raises Troubling Questions.
“Reparations assumes that the fate of black America can be determined by what white Americans do or fail to do.”
- The Hill

INTELLIGRAPHIC
In 1989, Congressman John Conyers introduced bill HR 40, a piece of legislation calling for the study of slavery and its effects on American society. While support for this bill has waxed and waned over the decades, congressional support is currently at an all-time high. 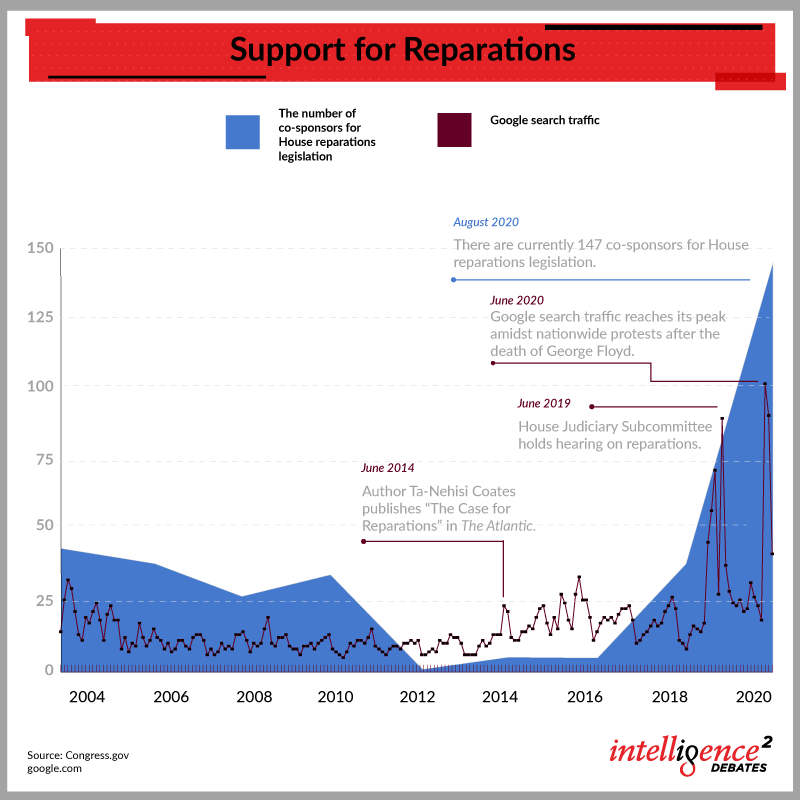 The New York Times’ 1619 Project, released on the 400th anniversary of slavery in the U.S., called on readers to reframe the modern narrative around slavery’s history and legacy in our nation. Recently, Senator Tom Cotton introduced a bill that would prohibit federal funds from being used to teach the project in schools, arguing its culturally divisive. Just what is the debate behind the 1619 Project? And how should we remember our nation’s history?
Our democracy’s founding ideals were false when they were written. Black Americans have fought to make them true:- New York Times, September 27, 1960

The ‘1619 Project’ Gets Schooled:- The Wall Street Journal

- Should the U.S. intervene in Belarus? Kori Schake argues that, with the right tools, Western nations can support human dignity and political liberty. [Read more via Washington Post, Kori's debate on national security.]

- But Steve Forbes warns that any intervention in Belarus could spark a security crisis for the U.S. [Read more via Forbes, Steve's debate on U.S. currency.]