IQ2US Staff
Tuesday, September 8, 2020
This Labor Day weekend, we ask you, our reader, to consider how your work has (or hasn’t) changed over the past year. As coronavirus continues to disrupt employment and working conditions, automation threatens traditional jobs, and both presidential nominees vow to bring work back to the U.S., questions surrounding worker’s rights are mounting. Let’s take a look.

Here’s what we have in store:
- That's Debatable: Do American Workers Need Unions?
- Intelligraphic: The Great Decline of Unions
- Double Digits: 25-30
- Points of View: Insights and analysis from past debaters

THAT'S DEBATABLE
Two perspectives on one of the nation's biggest debates this week.
Do American Workers Need Unions?

The first Labor Day was celebrated in New York City in 1882. More than a hundred years later, the holiday continues to spark contentious debate about just how labor should be organized in the United States and beyond. With the coronavirus pandemic reshaping life for both essential and non-essential workers alike, we ask: Are labor unions necessary to ensure safe, healthy, and fair working conditions for all? Or have they become obsolete in a more modernized and tech-driven society?
For: Why unions are good for workers—especially in a crisis like COVID-19
“Unions routinely bargain with employers over health and safety protections, and collective bargaining gives workers a stronger voice for addressing these critical issues than they would have individually.”
- Economic Policy Institute

Against: American Workers Do Not Need Unions
“Collective bargaining forces workers within the bargaining unit who would rather opt out of the union to choose between having to resign their positions or to accept union domination.”
- Law & Liberty

Labor unions in the U.S. have been credited for protecting workers, promoting higher wages and benefits, and streamlining political organization. They have also been criticized for having corrupt leadership, forcing workers to pay dues that they cannot afford, and stifling individuality. While union membership has declined over the decades, are they still an essential feature in the fabric of the ever-changing American workforce? 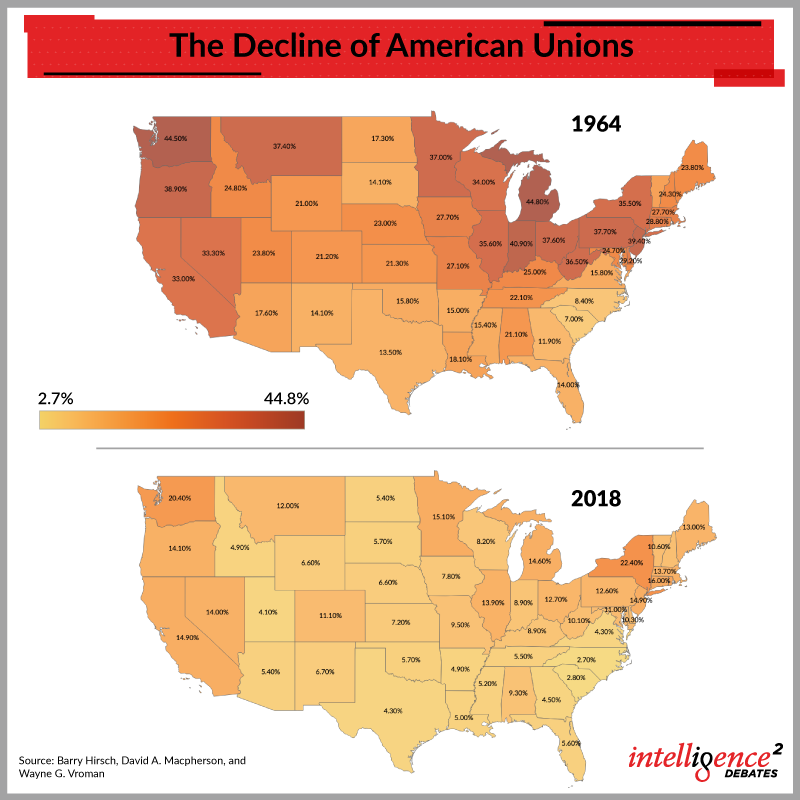 25-30
the estimated percentage of gig economy workers in the total U.S. workforce

California is currently a battleground over gig economy workers, with the court recently ruling that Uber and Lyft drivers should be classified as employees. Do gig jobs provide freedom and opportunity for workers, or leave workers at the whim of employers who do not offer security or benefits?
Uber Is Hurting Drivers Like Me in Its Legal Fight in California - New York Times

- How long until we’re back to normal? We have a while to go, says Mark Zandi. [Read more CNN, Mark's debate on taxation.]

- Could herd immunity slow the spread of coronavirus before we have a vaccine? Alex Berenson investigates. [Read more via New York Post, Alex's debate on the financial crisis.]