If Jeff Bezos had built an Amazon of antiquity, would Plato have been a Prime member? On the one hand, the old philosopher could have sold his life’s work to a wider audience, retired from Athens to Mykonos, and then used the extra time to troll Diogenes with a string of two-star ratings. On the other, he might have feared one-click retail therapy – and its accompanying hits of dopamine – would offset his own triumvirate theory of the Soul, whereby appetite crowds out mankind's spirit and reason.
We’ve all been there… lacking reason, with fingers hovering over deals-of-the-day, especially around the holidays.
Though Covid-19 may have quieted Black Friday’s usual stampede of in-person shopping (and thus reducing the volume of ER calls from Target), our appetites are still generally enticed by a bargain. And now, of course, is the time. This particular five-day stretch is when corporate retailers go big, tweaking consumer algorithms to make sure they still net what’s traditionally been about one-fifth of their total holiday revenue.
But what if we had to do it all over again?
What if our Republic, as Plato envisioned, was instead ruled by philosopher-kings? By which organizing principles would they choose to govern?  Would they still hold true to those Keynesian assumptions, imbibed in this current shopping bonanza, that spending stimulates economic activity and is ultimately a net benefit to society? Or would they question the very bedrock of that system?
It is against that backdrop that we resurface a timely debate, refereed by our host and moderator, John Donvan, who brings a very timely question as we enter this time of both reasoned and unreasonable spending: Is Capitalism a Blessing?
As always, let us know what you think.
P.S. -  Sign up here to find us in your inbox each week.  And if you like what you read, consider sharing this blog post with a friend here. You can always reach us at info@iq2us.org with ideas and feedback.

POINT / COUNTERPOINT Two perspectives on one of the nation's biggest debates this week. Shoud We Boycott Black Friday

Should states continue to write and enforce their own voting rules, or should there be a federal standard?
FOR:
Why 2020 Is the Year of All Years to Boycott Black Friday
“Black Friday is, and has always been, a shameless celebration of consumerism. Spending on this day skyrockets year over year. […] It’s a great day for the bottom lines of retailers, but not so much for shoppers, who are pressured to overspend.” - Huffington Post
AGAINST:
The Shopper Shring: How Retail Therapy Actually Works
“The basic psychology of retail therapy is simple. The evidence indicates that retail therapy works because it helps us take back control of a world that seems out of control. When we are shopping, we are momentarily back in control: we get to browse, we get to choose, we get to buy.” - The Grocer

INTELLIGRAPHIC Amidst rising layoffs and a new round of potential lockdowns, how much do Americans plan on spending this holiday season? Take a look back at how 2020 has compared to the last 18 years. 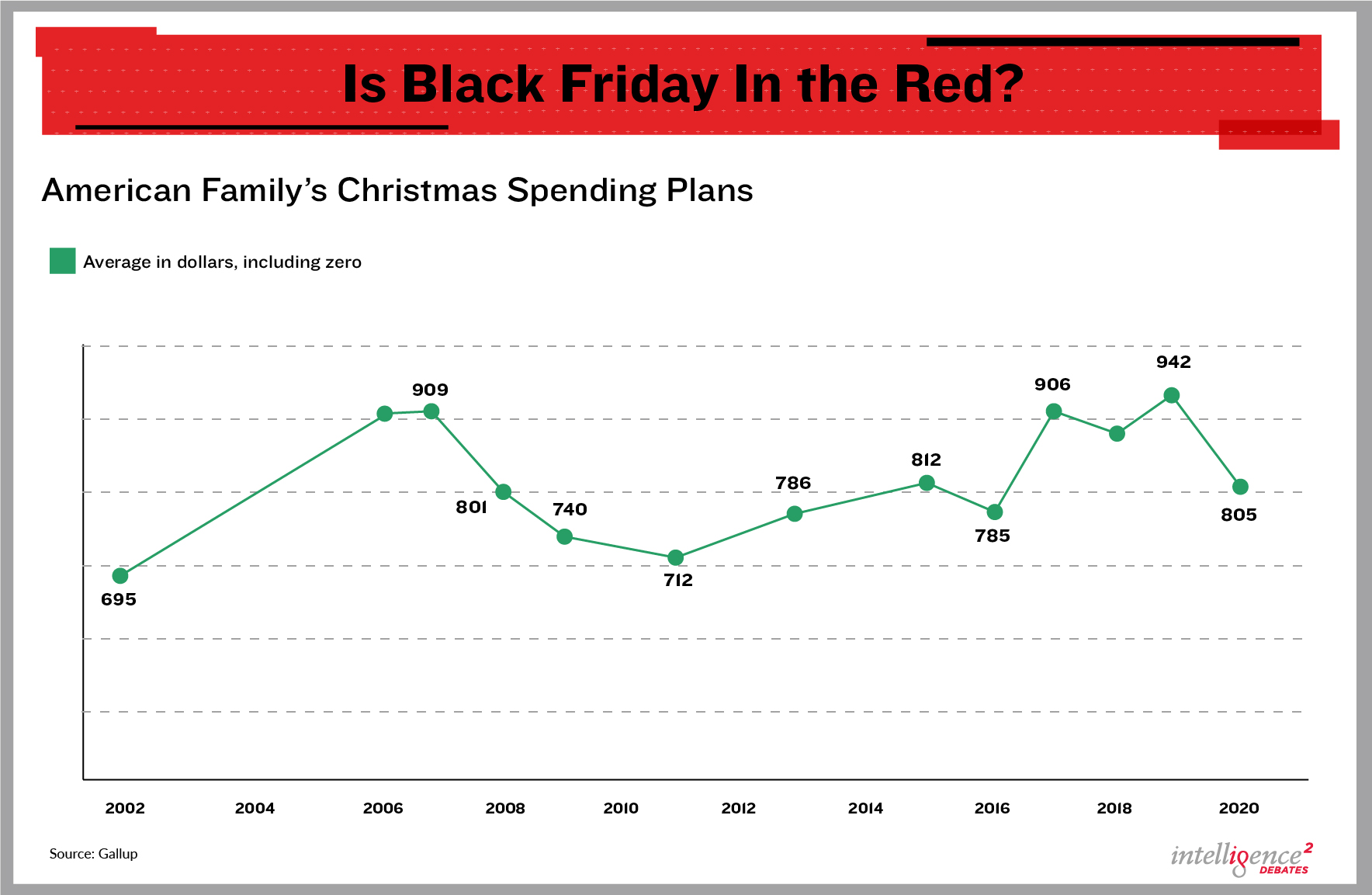 6,314,015 The number of people who went through a TSA checkpoint this week
Should You Travel for the Holidays?
FOR: Americans Should Be Free to Decide How to Celebrate Thanksgiving “Beyond the cost savings, NASA noted that there are already deals in place to use the spacecraft for flights by private astronauts.” - The Heritage Foundation
AGAINST: Seven governors: Americans need to stay home this Thanksgiving
“With Thanksgiving around the corner, we urge all Americans to stay smart and follow recommendations from medical experts: Get together with your family via Zoom to ensure your loved ones stay safe. If you are planning to spend Thanksgiving with people outside your household, we urge you to reconsider.” - The Washington Post

- A Biden administration will be the era of détente for U.S.-China relations, writes Niall Ferguson. [Read more via Bloomberg, Niall's debate on Wall Street.]
- Meanwhile, Kishore Mahbubani contends that the geopolitical dominance the U.S. once held is now beyond repair. [Read more via Project Syndicate, Kishore's debate on China.] - And what of U.S. foreign policy in the Middle East? Barbara Slavin argues that hostility with Iran will only serve hardliners on both sides. [Read more via Bourse & Bazaar, Barbara's debate on the Middle East.] - Former prime minister of Australia, Kevin Rudd, calls on President-elect Joe Biden to become the champion of climate change. [Read more via The Washington Post, Kevin's debate on China.] - What should we expect, and hope for, as the coronavirus pandemic is expected to climax? Paul Starr dives in. [Read more via American Prospect, Paul's debate on Obamacare.] We hope you will join us and continue to uphold the standard of public discourse. If you believe in informed, substantive and civil debate, please consider sharing our newsletter with a friend, follow us on Twitter or Instagram, and consider donating – whatever you can – to help keep this work going.
U.S.