One evening in early November, 2016, I sat at my desk inside Thomson Reuters’ Manhattan office, with a simple directive: Write two stories; one of America’s first woman president, and the other of Donald J. Trump’s improbable win. Competition demands the kind of speed that requires either story to be mostly written ahead of the results, ready to go live with just a click.
Only one, of course, would ever see the light of day.
Four years later, amidst a pandemic, growing polarization, and simmering social unrest, I’m still an observer of divergent narratives, prematurely formed before all the facts come in. Only now, those alternate realities on paper have found a way to live in the present, forged in growing polarization and fed by competing information ecospheres that appear to be drifting even further apart.
On Tuesday, we’ll begin to find out just how all of that impacts the U.S. presidential election, and perhaps equally important, its aftermath. With America’s decentralized system of democracy, the need to count and certify votes, and the unprecedented numbers of mail-in ballots, finding out just who won could take a while. Election officials will want to release preliminary results quickly, as allegations of impropriety will likely grow the longer the process drags on. Whoever wins, however, at least part of the electorate is likely to cry foul, just as the social media firehose gets pumping with (at least) two very different narratives.
So… we’d like to offer a little breather ahead of time. We’ll still examine two perspectives, but in a way that lends expert insights through civil discourse. Disagreement is a part of the healthy exchange of ideas, we believe, so long as you’re willing to listen to the other side. Though, naturally, you may disagree.
Here are some of our favorite past elections debates:
- The Electoral College Has Outlived Its Usefulness
- Gerrymandering is Destroying the Political Center
- The GOP Must Move to the Center or Die
- Progressive Populism Will Save the Democratic Party
- Give Trump a Chance
- Blame Elites for the Trump Phenomenon
- Two Cheers for Two Parties
Then check out our latest podcast for just one view of how the world is watching us. It’s a conversation with Ian Bremmer, president and founder of Eurasia Group and GZERO Media, picking apart the U.S. elections from a foreign policy perspective, the politics of the process itself, and just who Chinese President Xi Jinping might vote for… if he had a vote.
As always, let us know what you think.
P.S. -  Sign up here to find us in your inbox each week.  And if you like what you read, consider sharing this blog post with a friend here. You can always reach us at info@iq2us.org with ideas and feedback.

POINT / COUNTERPOINT Two perspectives on one of the nation's biggest debates this week. Ranked-Choice Voting

What if you didn’t have to choose just one candidate? Ask Maine. There, they now have something called ranked-choice, where residents can choose their top three. Elections go in rounds. And candidates are whittled down until there’s only two. To win, you need more than 50% of the vote, rather than merely the most votes... which begs the question: Should this be applied more widely?
FOR:
Andrew Yang, Bill Weld: Why ranked choice voting will improve America's elections
“This promising non-partisan electoral reform would give voters more voice, choice and power in the primary process.” - USA Today
AGAINST:
Why ranked choice is the wrong choice
“By definition, ranked-choice voting only applies to elections in which there isn’t a majority winner. - Boston Globe

INTELLIGRAPHIC Who gets your vote? Chances are the answer may depend on who you are. 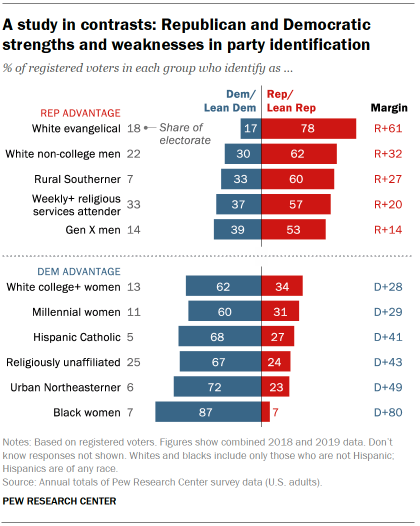 5.85 Million About the number of Americans who can’t vote Tuesday because of their criminal records That’s roughly equivalent of the state Wisconsin sitting this one out. And yet at least seven states are reassessing that reality, with a focus on the formerly incarcerated, also known as returning citizens. So we ask... under what circumstances should one be banned from voting, and for how long?
Getting Out the Vote in the Maze of Mass Incarceration
“Denying people the vote is presumed—wrongly—to be part of the deprivation of being locked up.”
- The New Republic
There Are Good Reasons for Felons to Lose the Right to Vote
“If you’re not willing to follow the law, then you should not have a role in making the law for everyone else.” - The Atlantic

- Warning of looming coronavirus and election day misinformation, Noam Cohen makes the case for Wikipedia and crowdsourced data. [Read more via Wired, Noam's debate on Silicon Valley.]
- What should you expect on election night? Nathaniel Persily lays out seven possible outcomes. [Read more via Slate, Nathaniel's debate on social media companies.] - Meanwhile, Kate Shaw argues that if President Trump is defeated and attempts to thwart a smooth transition of power, much of the processes are out of his control. [Read more via The Atlantic, Kate's debate on the Electoral College.] - Whether President Donald Trump or Vice President Joe Biden is elected as the next president, H.R. McMaster argues that China remains the greatest national security threat to the U.S. [Read more via Fox News, H.R.'s debate on Iran.] - What is the big takeaway from last week’s presidential debate? Roger Cohen dives in. [Read more via New York Times, Roger's debate on Israel.]
We hope you will join us and continue to uphold the standard of public discourse. If you believe in informed, substantive and civil debate, please consider sharing our newsletter with a friend, follow us on Twitter or Instagram, and consider donating – whatever you can – to help keep this work going.
Politics